Coins, Bank Notes, Han-Satsu (Promissory Notes) pre-dated the issuance of postage stamps in Japan. There are many collectors who specialize in Japan Numismatics and a smaller number who additionally specialize in Japan Philately. There is indeed a fascination for both broad collection areas and if the viewer has the time and interest then a more complex background emerges of Japan`s development from feudal times. As with other non-philatelic areas of collecting listed within this website - any growth in coverage would be viewer driven with submission of related material for publication. The highlighted publication `The Catalog of Japanese Coins and Banknotes`` illustrated below for reference is an excellent detailed catalogue of Coins, Bank Notes and Han-Satsu issued by Prefectures and government owned public bodies during the Edo period. In Japanese 280+ pages in colour. Recommended! 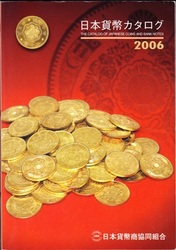 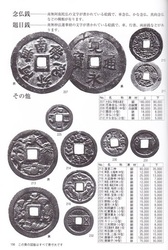 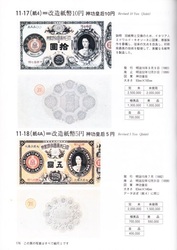 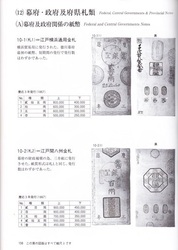 Feudal domains of Japan issued scrip called han-satsu for use within the domain. This paper currency supplemented the coinage of the Tokugawa shogunate. Most scrip carried a face value in silver coinage, but gold and copper scrip also circulated. In addition, some scrip was marked for exchange in kind for a commodity such as rice. In addition to those issued by the domains, forms of paper money were also issued by rice brokers in Osaka and Edo. Originally used only as a representation of amounts of rice (subdivisions of koku) owned by the scrip-holder and held in the Osaka or Edo merchants' storehouse, these scrips quickly came to be used as currency. In 1871, the Government of Meiji Japan ordered the abolition of the han system and ordered the exchange of all scrip for the national currency. Exchange continued until 1879. In the interim, some scrip carried markings from the central government indicating the value in yen and the smaller sen and rin.  (Courtesy Wikipedia). Examples are included here for information only.